Use of autotransformers in delta networks

The use of an autotransformer should be especially tested in all countries with delta networks, including e.g. North America, Japan, Korea, Taiwan and others. Problems can arise here due to the specific network forms and their earthing possibilities. The sketch below shows and describes a number of faults. The blue diagram shows the customer's network and the black diagram the autotransformer.

We would be pleased to advise you in more detail. 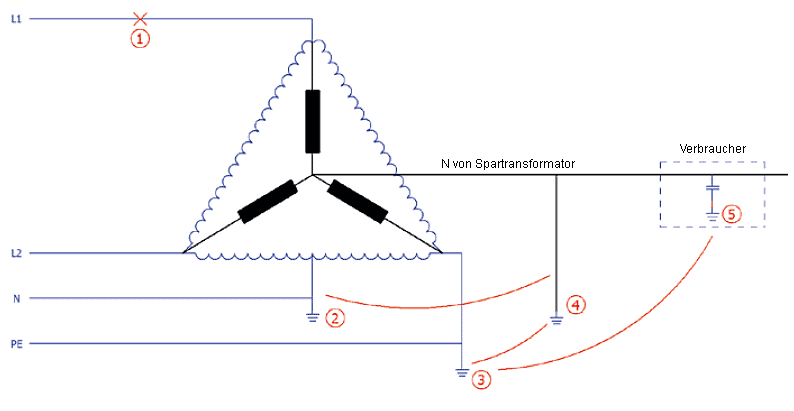 1. Failure of a primary-side phase. Here the star point can reach a higher potential in an uncontrolled manner. This can lead to the destruction of the consumers and the transformer.

2. Network form: Centre tap grounded. This is a typical network in North America. For example, there are voltages of 3x 480 V or 2x 240 V to the grounded center tap grounded.

3. Network form: Corner grounded delta. This is also a typical network form in North America and Asia. Here, 3-core cables are mostly used, whereby the green/yellow wire is used simultaneously for the outer conductor. This should not be confused with the cables used in European countries for single-phase networks!

4. In many applications the neutral conductor of the transformer is grounded. This is sometimes required in different standards and regulations. This earth connection would then have a direct contact to the "center tap grounded" or "corner grounded" point and thus a short circuit to the outer conductor!

5. Consumers on the output side, such as line filters, primary switching regulators, frequency inverters (DC-links) are usually equipped with Y capacitors. These cause the same error as described in point 4.